As Millennial women gain ground professionally, their roles in society and in the family continue to evolve. What does this mean for the insurance industry? 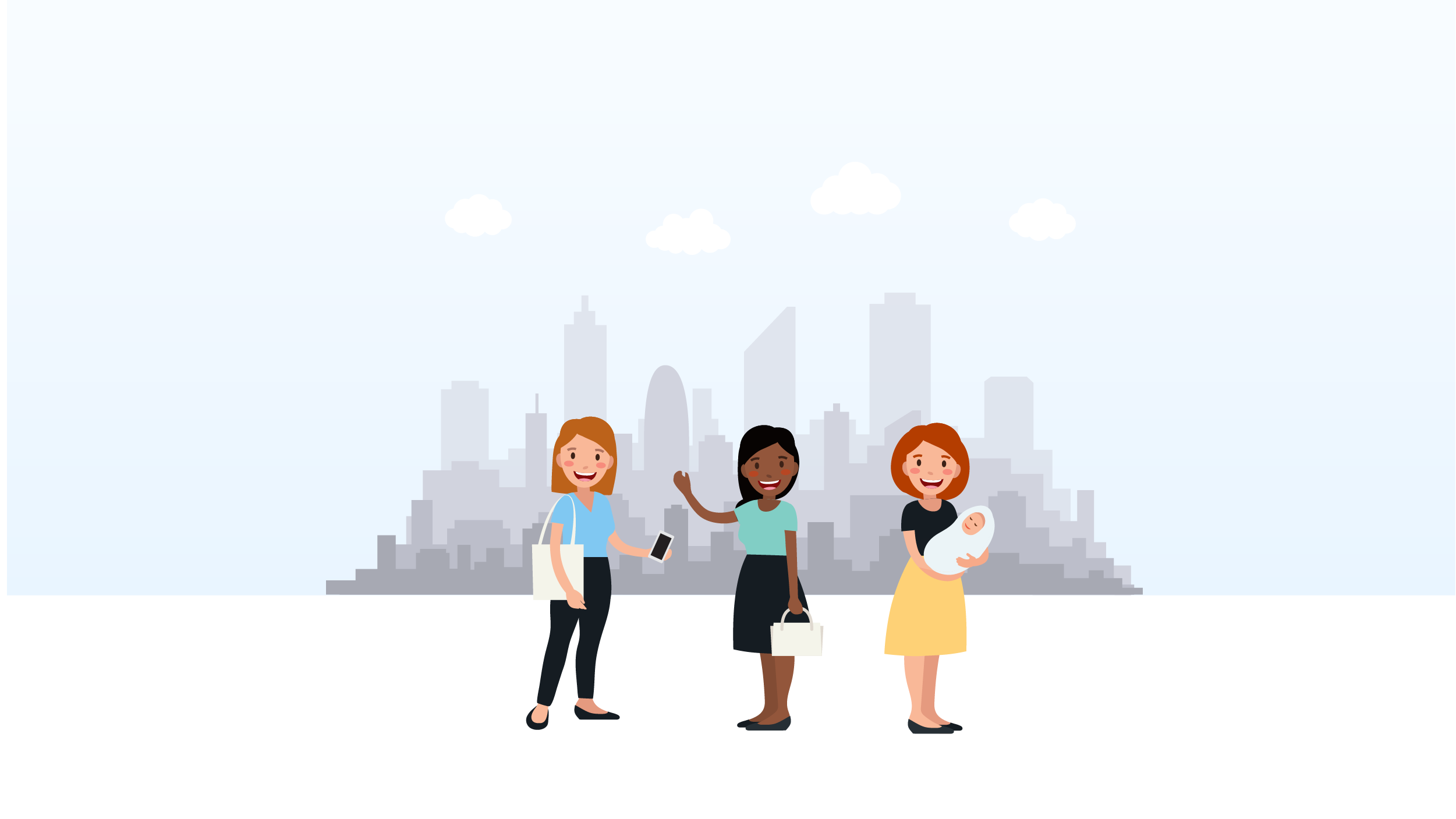 It’s no secret that when it comes to household finances, women have long played a key role, frequently taking the lead when it comes to things like budgeting, saving for the future, shopping, paying bills, and yes, buying insurance. But as the role of women in society rapidly evolves, with women waiting longer and longer to get married and have children, and to enter the stage in their lives where they might, values permitting, become the manager of the family finances, different priorities, needs, and financial and professional interests take shape, leading to newly established norms, particularly when it comes to buying and selling insurance.

We recently published a report based on a survey we conducted of over 300 Millennials to better understand their values, mindsets, and behaviors, particularly in relation to insurance. While earlier this month we dug into the four different Millennial personas developed based upon our findings, we now want to discuss a segment not addressed in the white paper we published: Millennial women, who, like the larger group of Millennials we surveyed, are difficult to pin down. Not only did our research reveal fundamental differences between Millennial men and women, but also amongst Millennial women themselves.

What we already know about Millennial women 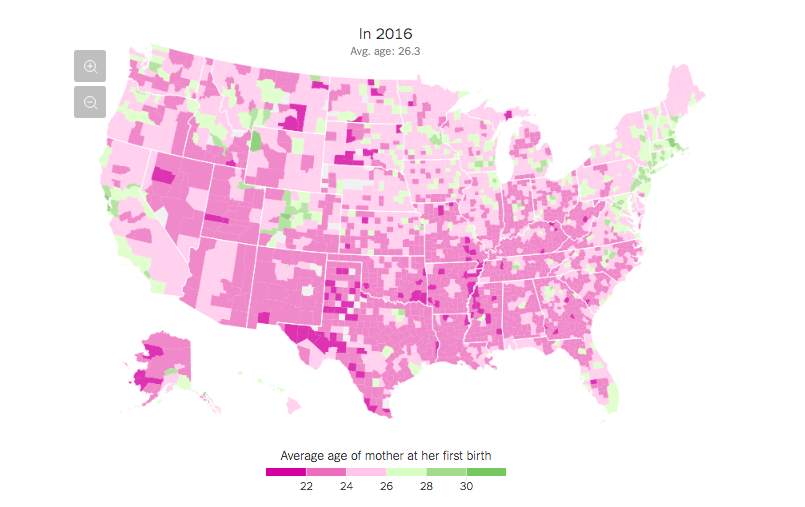 Even more recent research has further defined how some of these trends play out differently for women across the United States based upon demographic factors like where they live and education level. A recent New York Time study, for example, found that “women with college degrees have children an average of seven years later than those without — and often use the years in between to finish school and build their careers and incomes.” The same study also featured a map showing how where women live influences how old they are likely to be when they have their first child. 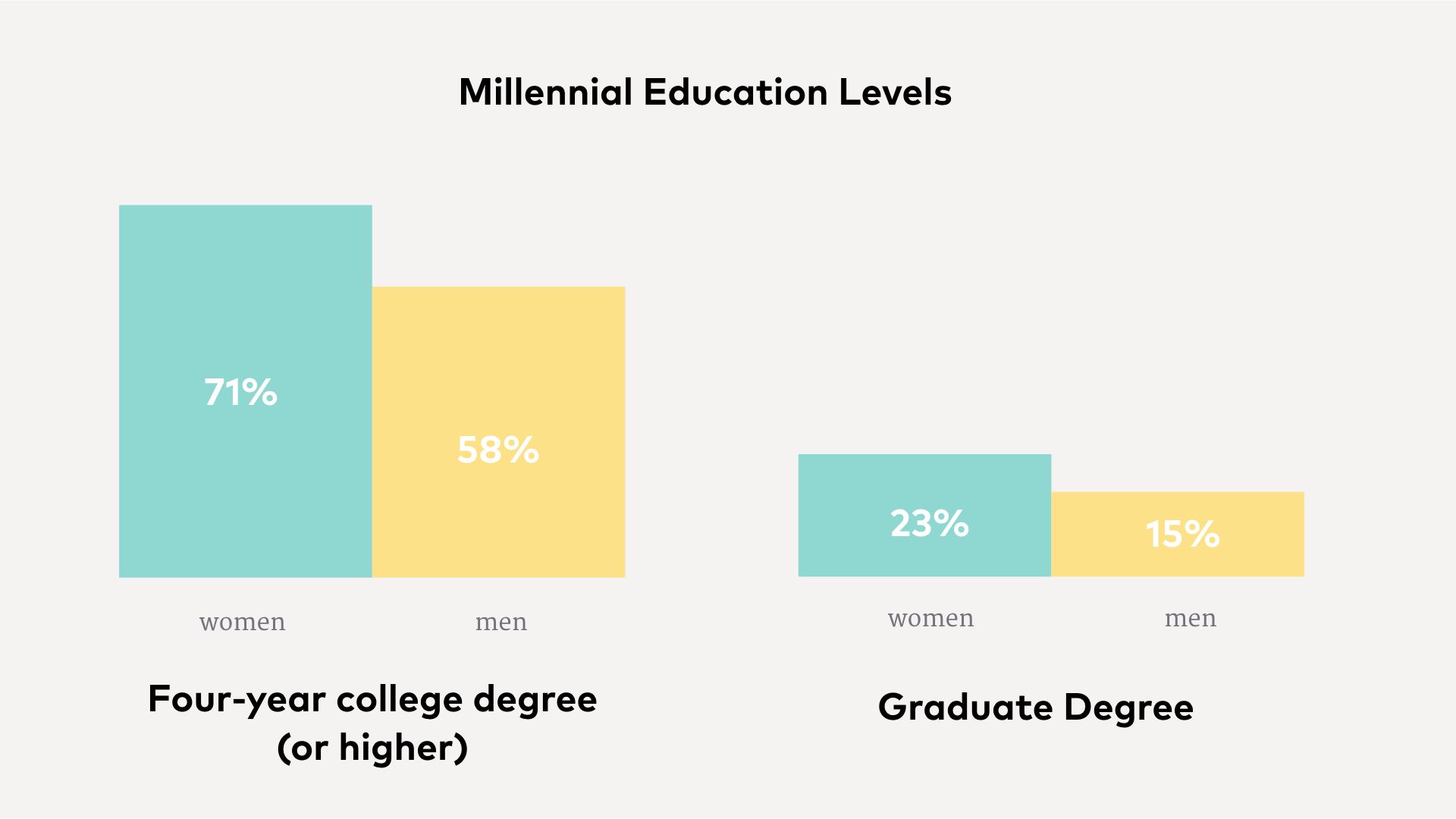 2. Millennial women worry more about the present and the future than men–despite being more established.

Even while our research found Millennial women to be generally more established in their lives and prepared for the future than Millennial men, the Millennial women we surveyed also reported much higher levels of worry and anxiety than men concerning pretty much everything, both in the short and long term. This finding may have something to do with Millennial women’s anxiety surrounding their ability to integrate their personal and professional lives and manage both a career and a family.

It’s a struggle the women in our research appeared to feel more acutely than men, with more women listing work-life balance as a key concern in the short and long term term than men. Yet despite reporting higher levels of worry and anxiety, the women we surveyed also reported feeling more satisfied with their lives and more optimistic about the future than men, a finding which confirm the findings of a recent report by Bustle based on their survey of 1000 Millennial women.

3. Millennial women tend to see family and career as complementary, not mutually exclusive. 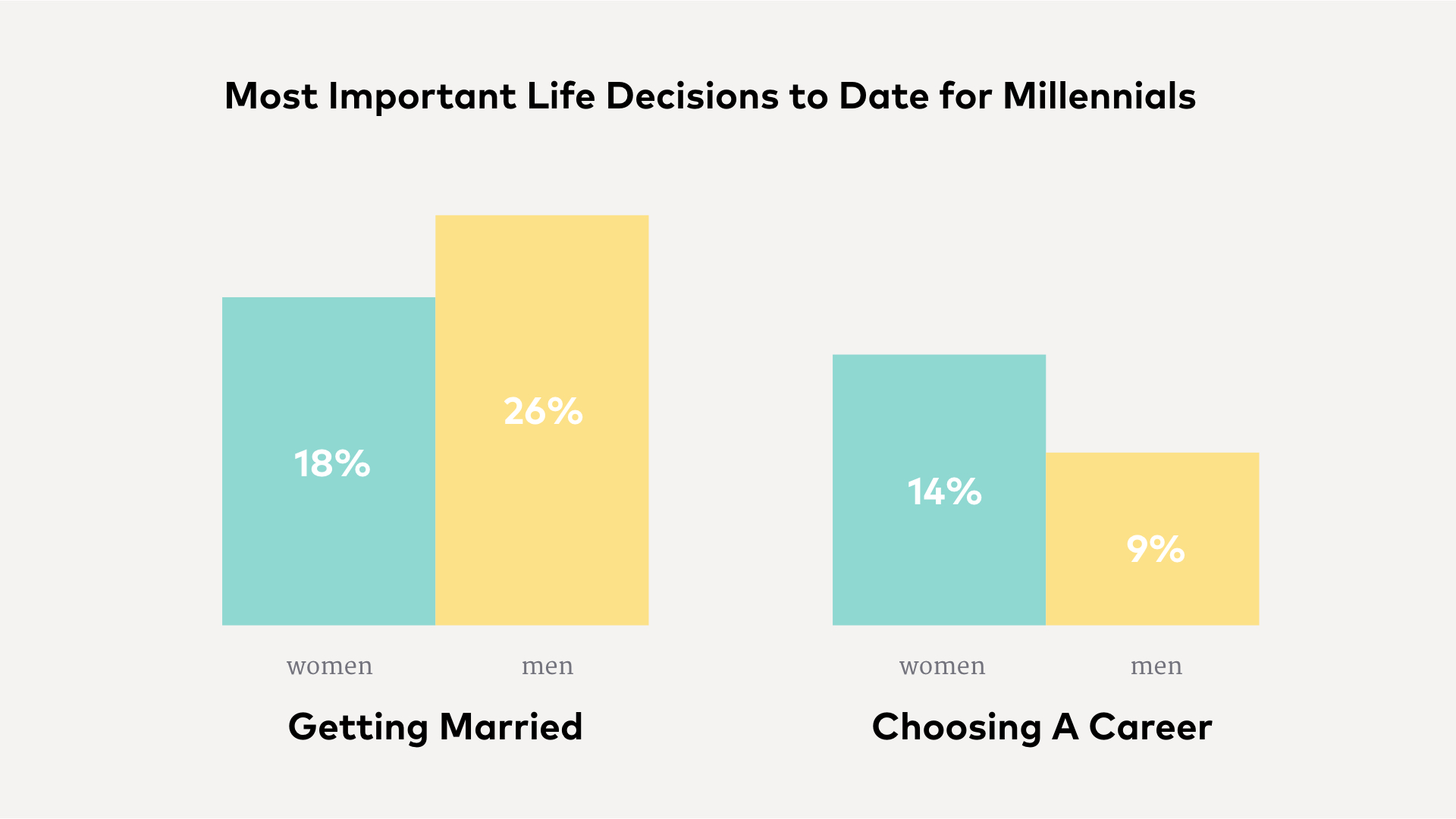 These findings color much of what we know about Millennial women from the Pew Research study. For example, Pew’s finding that in four out 10 households, women are the primary breadwinners and that as of 2014, 80% of women ages 40 to 44 with a PhD. or professional degree had given birth, compared with 65% in 1994–help contextualize our findings around the roles that family and career play in the lives of Millennial women.

4. Age and education are significant predictors of the mindsets, values, and behavior of Millennial women. 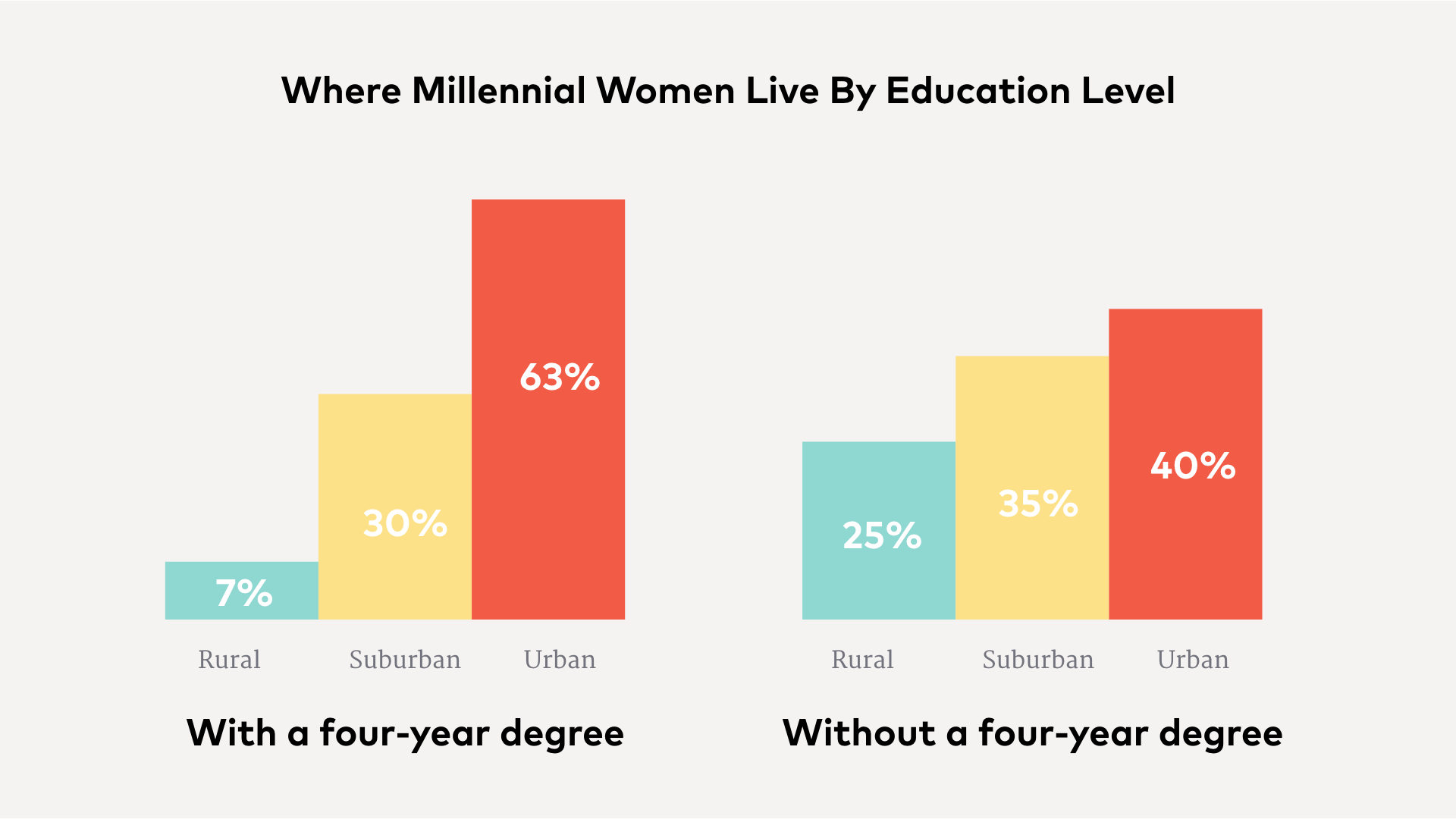 Significantly, we also found that although Millennial women are more educated than Millennial men, they are also more likely to see a lack of education as a barrier to achieving their goals and are more likely to report wanting to continue their educations.

5. Millennial women see themselves in stark contrast to their parents at their age, more so than their male counterparts.

Although both the men and women in our survey identified significant differences between themselves and their parents at their age, these differences were more pronounced amongst women. In context of what we know about how Millennial women tend to be more urban, more educated, more likely to work, and older when they get married and start having children than their parents, this finding did not come as a surprise.

Further confirming what we already know about Millennial women and how they differ from previous generations, amongst the biggest differences reported by Millennial women between themselves and their parents were education level, family status, and where they live.

Millennial Women and the Insurance Industry

While it has long behooved the insurance industry to pay attention to women as a market segment, by 2028 75 percent of discretionary spending worldwide will be controlled by women–and in the U.S., this is already the case, making women a segment that cannot be ignored. Moreover the behaviors, mindsets, characteristics and roles of Millennial women in society and in the family are rapidly evolving and vary significantly from those of previous generations, even more so than those of Millennial men, making a quick response from the insurance industry an imperative. Not only are women more educated and more career oriented than previous generations, but they also increasingly play new roles in their families, more frequently as primary breadwinners and single mothers. And even when they aren’t working full time, Millennial women are more likely to contribute in some form to the family finances, and often find doing so empowering.

As attaining an education and then building and sustaining a career become increasingly important to Millennial women and to the health of their families, the insurance industry needs to find a new language to address the Millennial woman and new forms of insurance that are designed specifically to empower her accomplish her goals, both personal and professional, independently of a spouse. And it must be more than a marketing ploy.

Companies that are doing it right

Other industries have already taken action. When LearnVest first launched back in 2009, it was designed as a website to empower women to take charge of their finances and become better financial planners. And although the company was recently shut down following its acquisition by Northwestern Mutual, it was beloved by women and did something few other companies have been willing to do: address a specifically female need in a way that didn’t pander or placate. The site was known for being devoid of much of the flowery so-called “girly” language that characterizes so many sites targeting women and for being more than simply a content site, but instead a tool that helped women actually change their financial behavior.

More recently, Ellevest has emerged on the scene. Like LearnVest in its early years, Ellevest, a robo-financial advisor, is designed specifically with women in mind. As a gender-based investment tool, Ellevest factors the unique risks and issues that women face in financial planning, ie. lower incomes, different earning curves due to family etc. and longer life spans to create unique financial portfolios for women. Moreover, the tool isn’t just for longterm financial planning–it helps women plan for short-term financial goals, like saving for a downpayment on a house.

HoneyBook is another tech startup that is taking Millennial women seriously. Founded originally as a site for event planners to manage clients and vendors, HoneyBook is now a full CRM for small business owners, but with a deep understanding of the challenges female freelancers and independent workers face. Earlier this year they published a report about the pervasiveness of sexual harassment in the freelance world and how it disproportionately impacts women. Their site now recommends that their users include “safe work environment clauses” in contracts and agreements, which they make available on their website.

Finally, Kinside, founded by one of HoneyBook’s co-founders is trying to help working parents make the most of their dependent care FSAs. They partner with companies to offer their services as a benefit, which include automating the claims process for submitting child care claims as well a platform for employees to more easily manage childcare and pay providers. They also assist clients who want to contribute to employee child care expenses like they might a 401k as an employee benefit.

Over the last several years, thanks in part to the #MeToo movement and to the prominence of more women in politics, we have seen the challenges women face professionally and personally take up more space in public discourse. Now is the perfect time for the insurance industry to take part in this discourse, put some stakes in the ground, and to become key players in helping address the unique challenges of Millennial women.

To learn more about what our research uncovered about Millennials, download our latest white paper.

Insurance & Millennials: A Coming of Age

By 2019, Millennials will number 73 million, and will have taken over the Baby Boomers as America’s largest living generation. In other words, Millennials are about to rule the world. Is the insurance industry ready? 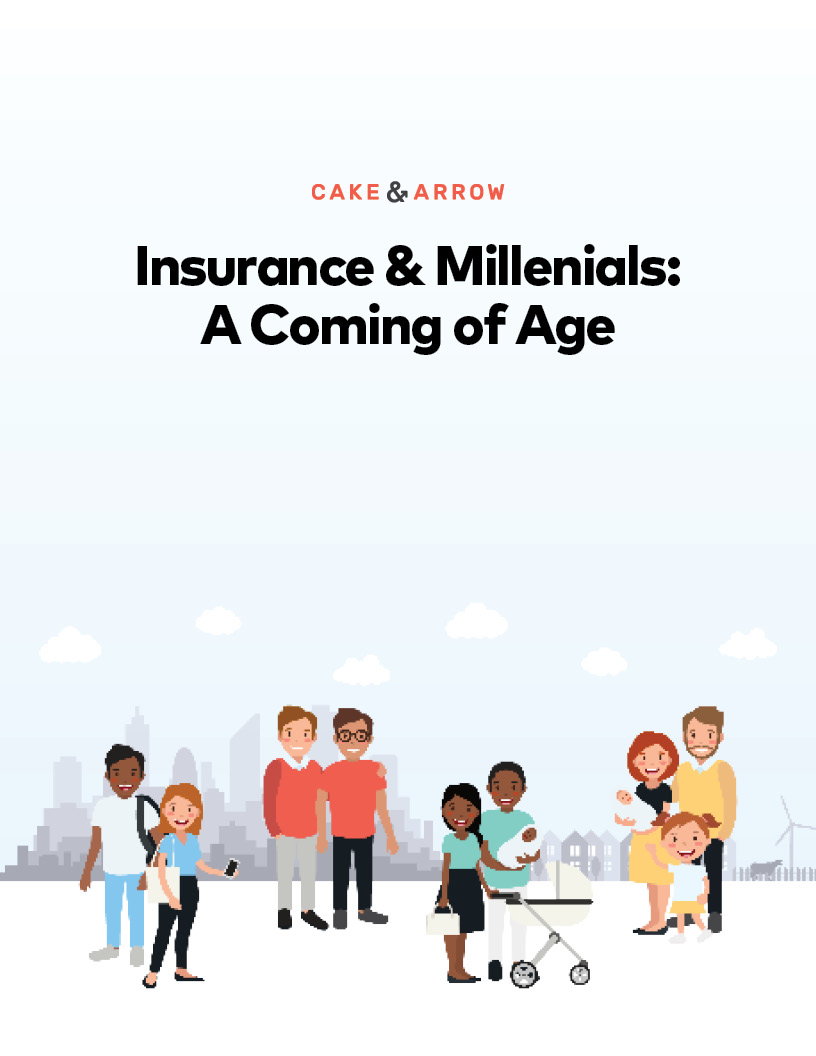 Download White Paper
Related
(Articles only appear in the frontend.)